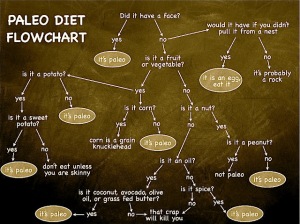 Since October 2011, I have been (almost) strictly following what is known as the “Paleo” diet (pronounced PALE-e-oh). Of course its not really a “diet” as much as a lifestyle. While there are several different definitions of what constitutes Paleo, it can be best described as a “hunter-gatherer” diet. In other words, meat, vegetables, nuts, and some fruit. Thus, your typical staple crops: corn, rice, wheat, and potatoes are off limits. The Crossfit site describes it well:

In plain language, base your diet on garden vegetables, especially greens, lean meats, nuts and seeds, little starch, and no sugar. That’s about as simple as we can get. Many have observed that keeping your grocery cart to the perimeter of the grocery store while avoiding the aisles is a great way to protect your health. Food is perishable. The stuff with long shelf life is all suspect. If you follow these simple guidelines you will benefit from nearly all that can be achieved through nutrition.

Two events contributed to the adoption this diet: a) joining Crossfit Fury and, b) reading Robb Wolf’s The Paleo Solution: The Original Human Diet.

It was surprising to walk into Crossfit Fury last Fall for the first time and read the phrase “No Sugar!” as a dietary axiom. Equally as surprising was the claim that steak, eggs, shellfish, and bacon (really?) are on the list of stuff you can eat. The folks at Fury recommended The Paleo Solution so Judi and I got a copy and read it, ironically, on a cruise ship the following week (talk about a conflict of interest!).

Since then, we have (for the most part) been “eating Paleo.” Here are my findings:

1) My intestines are no longer demon-possesed. Before going Paleo, I religiously ate a large bowlful of steel-cut oatmeal every day. No frills, by the way: just oats, salt, and raisins. That’s it. I kicked the soda habit a long time ago, and I tried to limit my red meat intake to maybe once or twice a week. I’ve been in decent shape over the past few years, doing a lot of running and faithfully hitting the gym.

But while I looked fine on the outside (not fine as in hot, but fine as in decent), the truth is my insides were a mess. Without going into too much detail, let’s just say I had an extremely fast metabolism. I was going to the bathroom all the time, and in between trips I basically felt like I had swallowed Mt. Vesuvius. I’m a little ADD, Type-A, and whatever else attempts to explain hyperactive behavior, so I figured that my intestines were just an expression of my life. But since I’ve switched to the Paleo diet the volcano has gone dormant, my digestive system feels great, and I can assure you everything is functioning as it should!

2) My vitals are good. Heart rate, blood pressure, cholesterol, and weight are all good. I’m hovering around 150 lbs., 30 pounds lighter than I was back in my early thirites when I wasn’t working out and eating lots of fries. I’m 15 lbs. down from where I was before I started eating Paleo and doing Crossfit, and I’ve gained muscle.

3) You don’t have to “roll me out” of a restaurant anymore. Our family went to IHOP recently and I ordered the bacon wrapped steak fillets. Most people would say that’s committing suicide by IHOP. However, I walked out feeling full yet not stuffed. Compare that to a stack of pancakes lathered with whipped cream and strawberry topping, hot chocolate and hash browns. Talk about a sugar coma. I’ve done that before, and all I can do afterward is lament the gluttony as I struggle to take a breath!

4) Sugar has lost it luster. I don’t “crave” sugar like I used to. Soda holds no power over me, nor does pasta, bread, or most desserts. Don’t get me wrong, I’ll have a piece of cake at my kids birthday party, and self-serve yogurt is a great “cheat” once in a while. But when I go to Starbucks, I have no desire for a mocha or a Frappucino (an occasional sip of my kids’ will do). Give me black coffee, no cream or sugar – just as God intended!

5) I still eat some dairy because I’m actually trying to gain weight. Super-strict Paleo frowns upon milk and cheese (eggs are okay, but not too many of those either). Milk is a rarity for me, but cheese, especially on a Protein-Style Double-Double (or the “Flying Dutchman”) from In-N-Out, is a must!

6) Breakfast can be interesting when you eat Paleo. I have a lot of bacon eggs for breakfast, but the experts warn to not go too crazy on either. They also recommend cage free Omega-3 eggs and all-natural bacon free of hormones. But there are other options I’ve learned to love: salad, chili (there are some great paleo chili recipes), and whatever was left over from last night’s dinner. I know, it sounds awful at first, but I’ve learned to love it!

7) My recovery time is quicker between workouts. When you’re eating clean you’re not housing all that processed material in your body. While Crossfit sometimes just beats my 38-year old body up, I’m doing myself a favor by feeding it stuff that helps my muscles heal and grow (well, at least heal!)

8) You don’t have to be an evolutionist to embrace the Paleo diet. My research and common sense prevent me from believing in the “goo to you by way of the zoo” view of life. So I’m not out to live like a caveman. God told Noah after the flood, “Every moving thing that lives shall be food for you. And as I gave you the green plants, I give you everything.” (Genesis 9:3). Then, in the New Testament, God gives Peter the Apostle the freedom to eat that which had been called unclean by the Law of Moses. Further, my Christian worldview provides the reasoning for improvement of all areas of life, including our understanding of nutrition. If scientific research supports the Paleo diet, that doesn’t mean my great grandma to the 100th power was a knuckle-dragging mouth-breather.

7) Here are some Paleo-friendly options that fit with a busy lifestyle:

So there you have it. Because the only thing unchanging in all the universe is God, I expect our understanding of nutrition to ebb and flow as the years unfold and research persists. But as a believer in man’s ability to discover truth, hopefully the swaying pendulum will lead us closer to the center of what is best for us, so we can feel better, live longer, and most importantly, bring glory to God in all that we do.

2 thoughts on “Why I Eat Paleo”